Although I have written multiple posts about subdomain takeover, I realized that there aren't many posts covering basics of subdomain takeover and the whole "problem statement." This post aims to explain (in-depth) the entire subdomain takeover problem once again, along with results of an Internet-wide scan that I performed back in 2017.

Subdomain takeover is a process of registering a non-existing domain name to gain control over another domain. The most common scenario of this process follows:

The implications of the subdomain takeover can be pretty significant. Using a subdomain takeover, attackers can send phishing emails from the legitimate domain, perform cross-site scripting (XSS), or damage the reputation of the brand which is associated with the domain. You can read more about implications (risks) in my other post.

Subdomain takeover is not limited to CNAME records. NS, MX and even A records (which are not subject to this post) are affected as well. This post deals primarily with CNAME records. However, use cases for NS and MX records are presented where needed.

DNS delegation using a CNAME record is entirely transparent to the user, i.e., it happens in the background during DNS resolution. The picture below illustrates the behavior of a web browser for the domain name which has CNAME record in place. 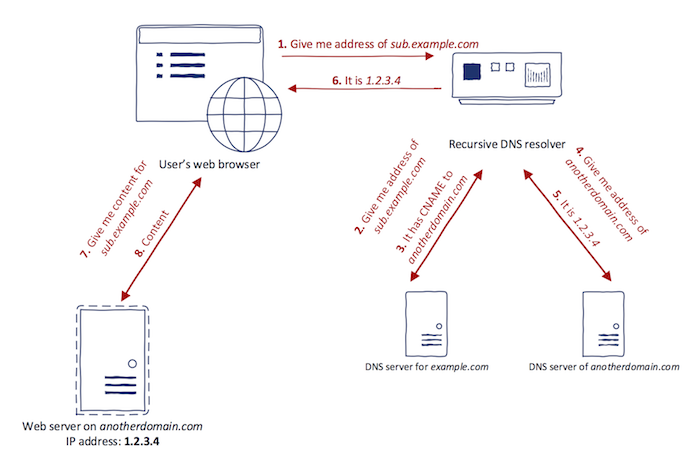 Note that a web browser is implicitly putting trust to anything that DNS resolver returns. Such trust means that when an attacker gains control over DNS records, all web browser security measurements (e.g., same-origin policy) are bypassed. This presents a considerable security threat since subdomain takeover breaks the authenticity of a domain which can be leveraged by an attacker in several ways. As will be shown in later, TLS/SSL does not fix this problem since subdomain takeover is not regular Man-in-the-middle style attack. 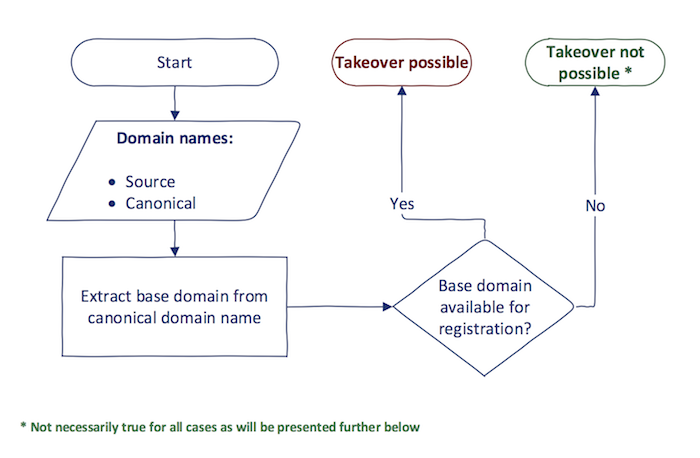 Checking the availability of base domain names can be achieved using domain registrars such as Namecheap. One might think that testing a DNS response status for NXDOMAIN is sufficient indication that the domain name is available for registration. Note however that it is not the case since there are cases where domain name responds with NXDOMAIN but cannot be registered. Reasons include restricted top-level domains (e.g., .GOV, .MIL) or reserved domain names by TLD registrars.

Cloud services are gaining popularity in recent years. One of the basic premises of the cloud is to offload its users from setting up their infrastructure. Organizations are switching from an on-premise setup to alternatives such as cloud storage, e-commerce in a cloud, and platform-as-a-service, to name a few.

After a user creates a new cloud service, the cloud provider in most cases generates a unique domain name which is used to access the created resource. Because registering a domain name via TLD registrar is not very convenient because of a large amount of cloud service customers, cloud providers opt to use subdomains. The subdomain identifying unique cloud resource often comes in the format of name-of-customer.cloudprovider.com, where cloudprovider.com is a base domain owned by the particular cloud provider.

If the cloud service registered by an organization is meant to be public (e.g., e-commerce store), the particular organization might want to have it present as part of their domain. The main reason behind this is branding: shop.organization.com looks better than organization.ecommerceprovider.com. In this case, the organization has two choices:

If the CNAME record method is used, the possibility of subdomain takeovers comes into play. Even though the cloud provider owns the base domain of a canonical domain name, subdomain takeover is still possible as is presented in the next sections.

The providers in the subsequent sections were chosen based on three primary reasons:

Amazon CloudFront is a Content Delivery Network (CDN) in Amazon Web Services (AWS). CDN distributes copies of web content to servers located in different geographic locations (called points of presence). When a user makes a request to CDN, the closest point of presence is chosen based on visitors location to lower the latency. CDNs are utilized by organizations, mainly to distribute media files such as video, audio, and images. Other advantages of CDNs include Denial of Service attacks protection, reduced bandwidth, and load balancing in case of high traffic spikes.

CloudFront uses Amazon S3 as a primary source of web content. Amazon S3 is another service offered by AWS. It is a cloud storage service (S3 is an abbreviation for Simple Storage Service) which allows users to upload files into so-called buckets, which is a name for logical groups within S3. 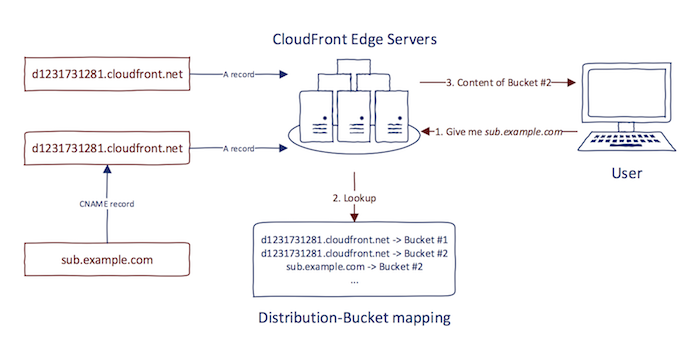 The picture below shows the error message that is presented after HTTP request to an alternate domain name which has the DNS CNAME record to CloudFront in place but is not registered in any CloudFront distribution.

This error message is a solid indication of the possibility of subdomain takeover. Nevertheless, the two exceptions need to be taken into account:

For an extended listing of affected cloud providers, I highly recommend checking "Can I take over XYZ?" guide.

The scanning was performed using a custom automation tool which I don't plan to release yet. The tool was able to scan cloud provider domains and found 12,888 source domain names vulnerable to subdomain takeover (November 2017). The cloud provider distribution follows: 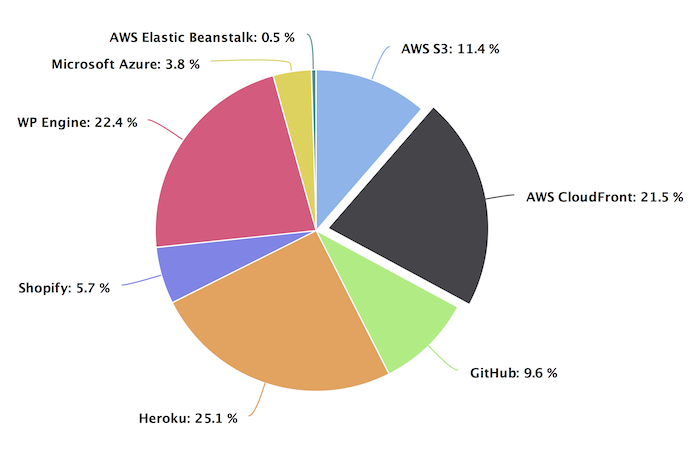 Some parts of this post are excerpts from my Master's Thesis.

Check out my other posts about subdomain takeovers: